Following on from our Fit-out work on their Rockingham Clinic, Australian Hearing asked us to work with Juo Design to develop their new Cannington Clinic to replace their existing one at the Carousel shopping Centre. Juo produced a very interesting, intricate design to meet Australian Hearing’s needs and the requirements for the shopping centre’s management, despite some conflict between those needs and requirements . One criteria that Juo had given themselves was to create a design that was less clinical and more inviting to Australian Hearing’s clients.

We started on site on 9th January 2017 and we needed to hand over to the Client in mid February. We started with an empty box, just walls, concrete slab and roof framing above. The tenancy needed to be built to exclude as much sound from surrounding tenancies and reduce sound within the clinic. The Audio rooms have double ceilings, with insulated grid ceilings above their solid plasterboard ceiling. Careful coordination was needed to ensure the services were installed when, and where they were needed. The space started to fill quickly with insulated walls: 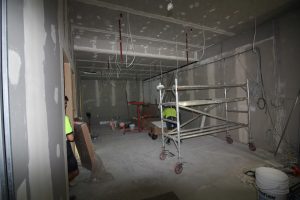 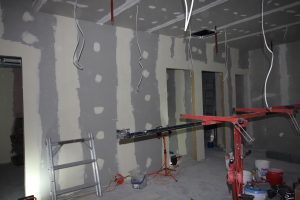 Painting and carpet started to progress the space towards completion, but there were to major items to be installed, to give the clinic it’s very unique feel. The plasterboard ceiling has been painted black, in anticipation of the timber slat wave ceiling, and the wall paneling, matching the ceiling, has been started. 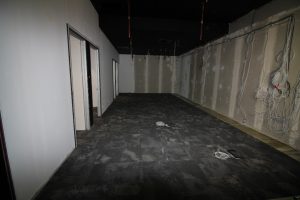 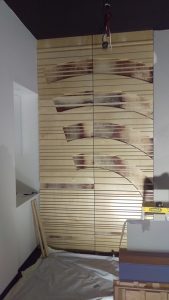 The slatted ceiling was installed in large sections. It was not terribly heavy, but it was awkward. Albec Constructions fabricated and installed it, to their always high standard or workmanship. The lights and sprinklers needed to have been installed in line with the support ribs of the ceiling before it was lifted into position and the roller door at the front needed to be in exactly the right position to run through a slot in the ceiling. It all fitted perfectly. 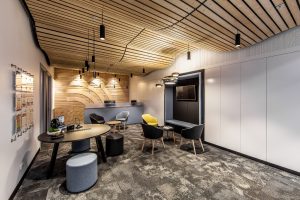 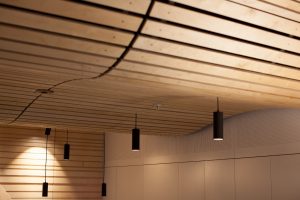 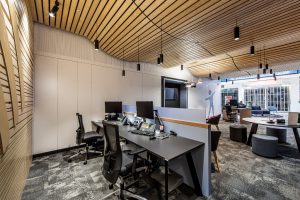 Once the ceiling was installed, the rest of the joinery and furniture could be brought in, with admin desks at the back, waiting chairs and product table in the centre, and the welcome desk at the front.  The entire side wall was made up of cupboards, with a TV and bench seat alcove in the middle. The cupboard doors were gloss two pack coated board, with a routed feature behind the welcome desk with the Client’s logo spread over four doors. 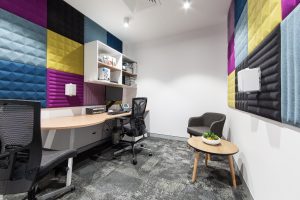 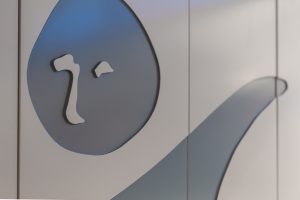 The shopfront, by Major Media was installed last, made up of steel light boxes with the sound wave logo and shapes all laser cut into the front. Laser cut panels were made to cover the existing fire hydrant cupboard. The overall impression of the Clinic and the facade was fantastic, standing out from the surrounding tenancies and completely achieving the effect created in the design. 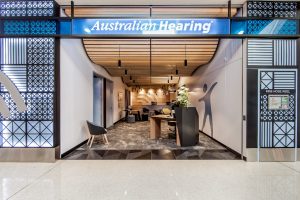 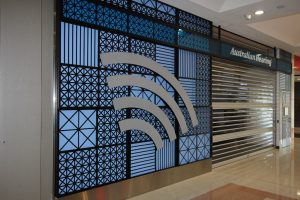 After operating for a few months, it was decided that the welcome desk needed to be replaced by a larger unit, where the staff stood rather than sat, as that would work much better with the way they interacted with their clients. The new desk as fabricated by Sympari,who had done all of the original joinery, and the existing desk was put into storage and later used at the Busselton clinic. 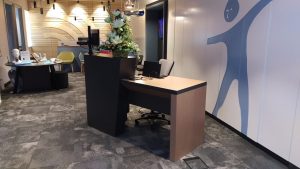 At the same time the new desk was being done the design was done to close the front of the clinic with glazed automatic sliding doors and fixed glass panels. Sound levels in the mall were high enough to interfere with the testing in the audio rooms. Juo came up with an industrial style heavy steel frame to support the operating track and sliding doors but retained the open aspect of the clinic. On the 16th September the steel work was installed, and changes made to the air conditioning system as the tenancies all used the mall for return air movement. 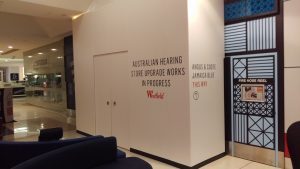 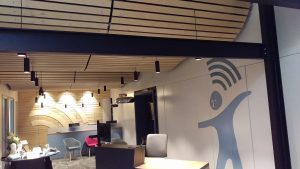 The hoarding was removed the day after the steel went up.  The glazing and doors were installed two weeks later and the shopfront became this: 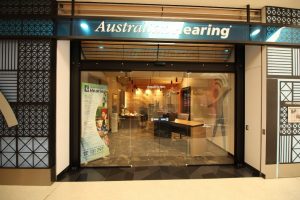 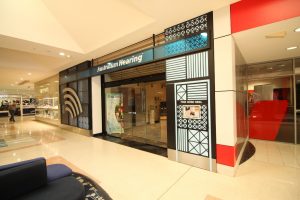 Fast forward to June 2019, and Australian Hearing are about to go through a Re-branding, so they asked us to remove the Blue Man logo on the cupboard doors and the Sound Wave logo from the back wall. That meant replacing the 4 doors with new and removing the slatted wall paneling from the back wall to install 4 new panels that matched the slatted ceiling. That was expected to be a more difficult process than it was and the site work was finished by lunchtime, and the painting and clean up finished by mid afternoon.  Mark Walsh Cabinet’s work was as good as the excellent original work on the slatted panels and doors. 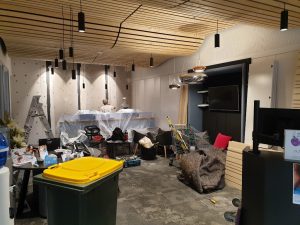 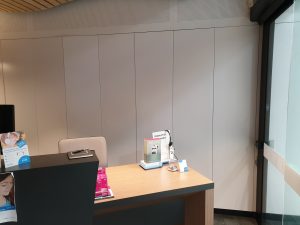 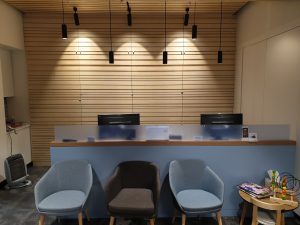