Our second project for the Department for Child Protection was the fit-out of part of their head office on Level 2 of 189 Royal St, East Perth, as we were the successful tenderer.

The tender called for the project to be done in three stages as it was not possible to relocate the DCP staff elsewhere while the work was being carried out. We suggested that the project could be done in two stages, reducing the overall construction time and the inconvenience to the DCP Staff. This picture is Stage 1, where we have put up the plastic hoarding and laid the floor protection. 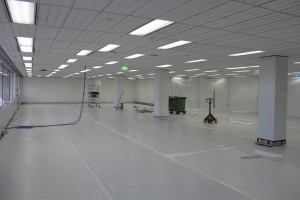 The fit-out design was straight forward, consisting of workstations, offices and meeting rooms, plus a much anticipated breakout area. The staff in this area had been sharing a very small kitchenette with the staff on the rest of the floor, and they had no space available for tables or chairs. They were very pleased with their new Breakout Area. It is a colourful, interesting room and an attractive place for lunch or breaks. 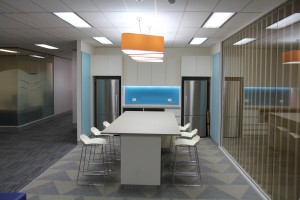 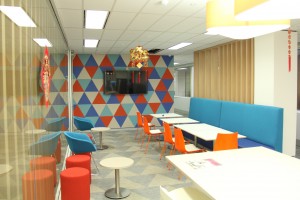 A design feature used in the breakout area and other places throughout the space was colourful triangular acoustic panelling, adding colour and interest to an otherwise simple design. The patterns, made up of individually cut triangles, challenged the installers to correctly cut and line up the panels, but their efforts were rewarded with a spectacular result. The DCP were so pleased with this feature that they asked for additional panelling as a variation elsewhere in the space 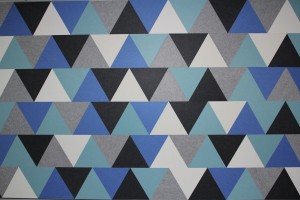 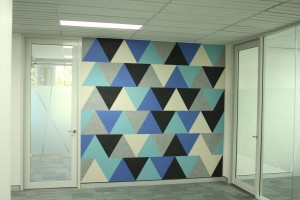 The open plan workstations were also a great improvement on the previous enclosed carrels. The design produced much more open spaces and better access while increasing the number of desks in the area. 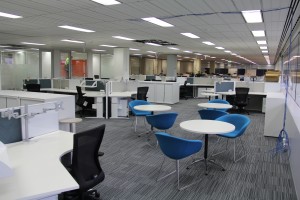 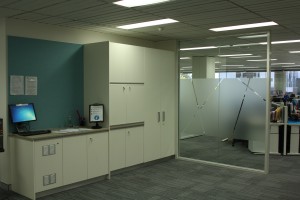 No existing as-built drawings for the air conditioning system had been located for the tender, so we carried out the design to determine whether or not additional equipment was required for the meeting rooms or the open spaces. We were able to locate drawings of the existing equipment and were able to produce a design that only required minimal additions to the existing equipment. We did find that most of the existing flexible ductwork was deteriorating to the point of blowing dust and insulation into the area, with many connections loose or broken. We submitted a solution for this that was accepted as a variation and replaced all of the flexible ductwork in that area. This produced considerable reductions in the running time and volumes of air that needed to be provided to the area, and a more consistent air flow and temperature throughout the office.

We completed Stage 1 on time for the planned staff relocation, including the installation and connection of the workstations and desks by a separate contractor. We relocated the hoardings and floor protection and proceeded to construct Stage 2. That was also completed on time and staff that had been spread around the building could all be located permanently combined into the completed area. The feedback we received from the DCP, the architect and Colliers (the facilities manager), was consistently positive.  We had a great relationship with the staff on site, and received no complaints about noise or disruption.