Just before Christmas 2018 we were awarded the tender for the refurbishment of the toilets and bike storage area for 256 Adelaide Tce, which we commenced on 18th January. The drawings provided with the tender were quite poor, with no services drawings provided, despite the project requiring major plumbing and mechanical work.  The architectural drawings required major revisions so that the plumbing for the showers and toilets could be altered to avoid the column heads in the car park underneath.The demolition of the existing toilets was needed to expose the air conditioning equipment above, so that the work to relocate and rectify that could be determined. The picture below shows the male toilet following demolition, with the markings for the in-slab reinforcement in pink and the plumbing services under the slab in blue. The second picture shows the studwork for the relocated walls for the female toilet. 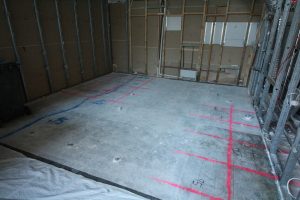 The existing bike store area was in a dark corner of the car park, with water seeping from various points draining across the floor. That was demolished and a much larger area was provided closer to the Victoria Avenue entry.  That was fenced and new lighting was installed, along with secure gates and some lockers. Over 30 wall mounted Steady Rack bike racks were mounted on the wall and fencing, and 6 floor mounted racks were fixed in the centre of the area. Plenty of room was left for additional racks to be installed in the future if required. 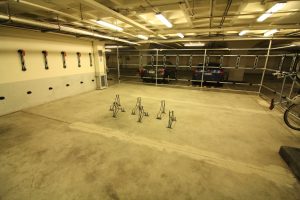 The bike storage area was constructed while the client decided how to proceed with the mechanical services above the toilets, with tiling work proceeding in the female toilet at the same time. Eventually a decision was made and we were able to complete the ceiling and tiling in the male toilet, followed by the installation of toilet cubicles, joinery and fittings in both toilets. The picture below shows the vanity, hand dryer and feature tiling in the female toilet. The completed work produced more than the expected improvements in the existing toilets, providing an excellent result at a very high standard of finish, with an exceptionally low value of variations, given the poor documentation provided for the project.