Carleton Constructions were the successful tenderer for the construction of 3 Riverpark Interpretation nodes for the Department of Parks and Wildlife, at Point Walter, Bicton Baths and below Heathcote, on the south shores of the Swan River. The Interpretation nodes are angular timber deck structures that provide walkways, seating and signage for  access to, and information about, three of the most beautiful places on the river. 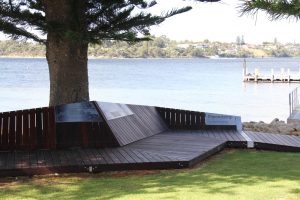 The design for the nodes provided a unique challenge. They required a high standard of joinery workmanship, with tight tolerances between all of the pieces to achieve the spectacular appearance the Client required.  They were to be built on a structure formed of multiple angles in 3 dimensions in materials not normally used for those shapes or that environment. 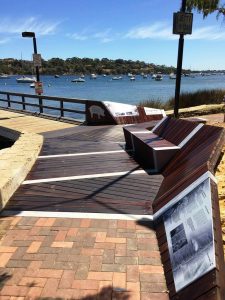 Each site needed to have very detailed shop drawings prepared, followed by the fabrication of the aluminium, the construction of the footings and the assembly of the structure and deck on site.

In preparing the shop drawings and in the site works, Carleton Constructions provided a considerable amount of advice and suggestions to the Client to ensure that the completed work met their expectations. The nodes are constructed in materials not normally used for that standard of finish in places where they need to resist weather and salt water. The suggested changes were accepted by the Client, as they met their criteria for appearance and longevity but simplified and enabled their construction.

One example of this was the change to the detail where the angles side planes met the horizontal plane of each deck, to allow movement over time from weather and ageing, yet maintaining the sharp edges required in the design. Other examples were the changing of the framing from individual beams to single piece frames, and using concrete footings in lieu of screw in piles.

The nodes achieved the spectacular appearance that they were designed for, and provide a  suitable and complementary addition to the very beautiful places where they have been constructed.

The fabricated aluminium beams were placed on site at Point Walter and used to confirm the location of the screw piled footings, the spacing of the beams and the angles between them.The footings were installed and the aluminium and composite fibre deck framing was completed. 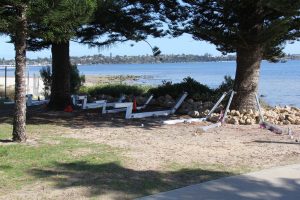 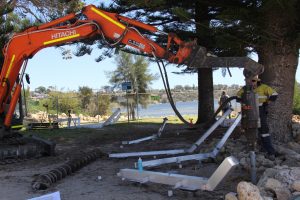 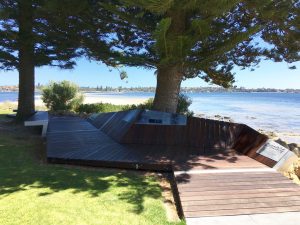 Carleton Constructions had the frame for the Bicton Baths node fabricated as one piece, substituting aluminium angle for the composite fibre box sections proposed in the design, with the agreement of the Client. This made it possible to fabricate the frame more accurately to achieve the designed angularity of the node.

The timber decking also needed to be cut very carefully to achieve the designed angles and to meet the standard of finish required.The picture above shows how well the timber decking is fitted together and how it meets the many different angles in the design.

The framing for the Heathcote node was fabricated in three large sections to ensure that the angles of the beams met precisely as they were designed. The footings were changed from screw piles to concrete pads to better suit the site and to simplify the construction.  Access to the site would have made it difficult to get the excavator to the site for the screw pile installation. The concrete, the framing and the decking all needed to be taken up the narrow pedestrian path by hand or by a small bobcat, with a mini moke being pressed into service to move the timber and the limestone spalls up to the site. 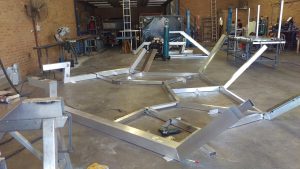 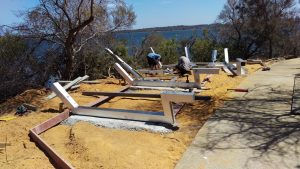 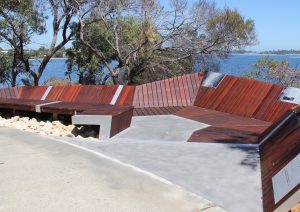