We demolished the existing 35m long 1.7m high reinforced brick retaining wall at 29 Havelock St West Perth, having been awarded a design and construct contract including approvals. Planning Commission approval was required as the property is located in the Parliamentary Precinct and the work on site started in July 2016. The existing fence and wall was removed over one weekend, reducing the risk to traffic and pedestrians as it could only be loaded into trucks on the street.

The existing storm water drainage system was found to be in a poor state as it was exposed through the demolition, so the design was updated to replace the brick soakwells with precast concrete ones and replace all of the pipework. The following photo shows the compaction of the site under the new limestone retaining wall. 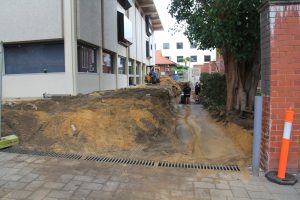 The limestone wall was built up in layers and waterproofed until it reached the old carpark level. The area was then backfilled and compacted and the reinforced concrete paving laid. We had recommended to the client that they use concrete rather than the original brick pavers, as part of the reason that the original wall had failed was stormwater seeping through the paving down the back of that wall.  The combination of the upgraded stormwater system and the concrete paving will provide a structure that will last considerably longer than the original wall. After the concrete slab was poured, the top layer of the retaining wall and the limestone fence that replaced the original timber fence was completed. 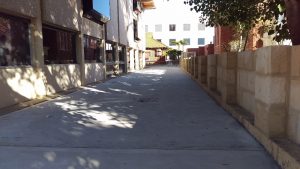 We developed a very good relationship with the tenant, Perth Clinic, with this project.  The clinic is open 7 days a week, so the work needed to be done while they were operating, with noise and disruption kept to a minimum. Their manager on site was always very helpful, enabling us to carry out the work as quickly and efficiently as possible, and the tenant and client were very satisfied with the project on completion.